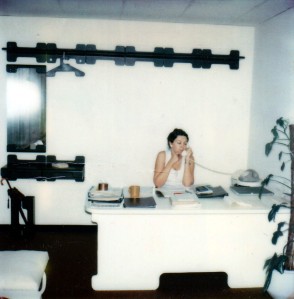 Sometimes there are events in life which catapult us into a completely new reality. For me, becoming a mother was one such event. This of course is true for all new mothers ~ it’s a life changing experience, but the extent of that change depends on where you were before your bundle of joy enters the world. Prior to my daughter’s birth I was totally focused on work. Hubby and I had both been in empire-building mode for a number of years, and it took 100% of our time. I was in fact so busy ‘doing’ that I hadn’t really given much thought to what would happen when the baby arrived. To be honest I think my feeling was that I’d give birth in the tea break and carry on, but oh how wrong I was! Not only did my life and priorities change in an instant, my connection to ‘doing’ and ‘knowing’ as it was, changed dramatically as well.

It was late November, a hot and sticky time in Australia, and I was due any day. I’d given up going to the office the previous month to prepare for the birth, but instead of relaxing, in my organised way I spent most of my time cooking food and freezing it. Overall, it had not been an easy nine months ~ I was one of those pregnant women who had morning sickness the entire time, so let’s just say I didn’t bloom and I was well and truly ready to replace my baby bump with the real thing.

Early in the pregnancy I had a serious scare. In the moment when I realised I was in danger of losing the baby I instinctively sent out the strongest message to the little life within me to ‘hold on and stay’ … and she did. That should have been the first inkling of what was to come, but I didn’t connect to it just then. I spent ten very quiet and still days feeling anxious until the danger was over. And when it was, I went back to being busy and doing ~ so busy that I didn’t buy a thing for the baby till I was seven months pregnant. When I finally did launch into a shopping spree, like everything I did in those days, it was all purchased, delivered and assembled within two days!

So by the time I was full term, I had very little left to do. The bassinette and cot was organised, the baby clothes were washed and folded, the nappies were ready, the baby’s room was decorated and the house was in perfect order. So I decided to weed the garden … you know that burst of energy just before the baby is born? Well that was it. A few months earlier we’d moved into a lovely turn of the century house, and the garden was a work in progress, and I was full of energy. So, on my hands and knees in the shade of the Jacaranda tree, I pulled weeds for most of the day. When hubby came home, I made one of my cordon bleu dinners and we went to bed early to read. Half an hour later my water broke, and with bag in hand, we headed off to the hospital.

It was a long night and an even longer day which followed. Suffice to say that by the time I’d been in the labour ward for a few hours, I was not only stroppy with hubby, but with everyone else who walked through the door. I will however be forever grateful to the intern who panted with me for hours! Having had an induction I was launching from one pain to the next without a break until suddenly … everything stopped. The labour ward was becalmed! After more than twenty one hours, for me it was a welcome relief. And for the next thirty minutes doctors and nurses leaned against the walls and chatted about their weekend plans!

Then all of a sudden, I felt an almighty thump from above. It hit my stomach with full force and without thinking I shouted, “It’s a girl”, and out she came! It was quite a moment, one which I have never questioned because I just knew. And there it was ~ all of a sudden I just ‘knew’. Giving birth switched on a light, and it was significant. My new awareness felt so alive and awake that it was almost as if my previous existence was a dream. There were many things I was to learn and experience in the years to come, and while my life was still filled with lots of doing, it was now quite different ~ the divine connection between mother and child had been forged and the door to the most wonderful and remarkable ‘knowing’ had opened.

3 thoughts on “From Doing to Knowing”