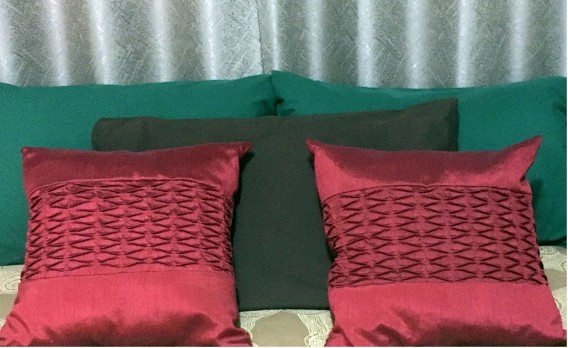 The house was full of anticipation. Guests were arriving, beds were being made, and rooms were being spruced up by the owners.

‘Honey, where’s the brown pillow for this bedroom?’

‘The one for the bed in here.’

It was the fourth bedroom. A neat and proud little room. Proud because it was the only themed room in the house. Three large paintings of red and green Japanese lettering representing peace, joy, and happiness adorned the cream walls. The curtains were a shimmering light brown with large gold rings that glided effortlessly across solid wood rods. The bedspread was a rich brown and cream floral-pattern, on which sat six pillows—two emerald green, two dark brown, and two deep ruby cushions with fancy stitching. All matching perfectly, in their perfect place.

But now, one of the big fluffy brown pillows was missing!

A search began—in the linen cupboards, under the bed, in the other bedrooms, behind the washing machine. It was nowhere to be found.

The question arose as to who was the last person to stay in the neat little room? Family members were contacted. The room, of course,  wanted to look perfect and waited with bated breath for what was to come. Phone calls continued all afternoon. The owners had quite forgotten who had occupied the room last as they spoke, one by one, to all the family.

‘Did you take a dark brown pillow home?’

‘No, not me, but there were definitely four pillows—two green and two brown.’

They were all adamant. Everyone remembered the four pillows as they had all fluffed them up while sitting in bed, but no-one remembered taking a dark brown pillow home.

So, the bed was made up with only five pillows, but the room was not happy and nor were the owners. The guests came and went—they had stayed before, and there was much discussion about the missing pillow and what might have become of it. Conversations, in fact, continued as the months went by. Someone took the pillow, but no one was owning up. It was a conundrum. So much so, that every time a family member visited there was no peace—trust had been lost—who took the pillow?

Eventually, it became a story of some hilarity and anonymously-sent pillows started arriving in the mail with funny little notes… ‘the pillow returns’… ‘fluffy comes home’. Amusing at first, it became too much, even for the post office who rang with a plea.

‘What’s with all the pillows! They’re taking up too much space!’

Even the local newspaper wrote a humorous story, but in time, other more interesting stories took up the pages of the paper and everyone forgot about the missing pillow.

One thought on “The Missing Pillow”