I married a builder. Now this doesn’t mean that I’ve lived with Mr. Handy for the last 36 years ~ far from it! He put his tool bag away long before he met me and went into corporate work, where he rose to dizzy heights. Then he married me, and in addition to being life partners, we also became business partners.

This made for a very busy lifestyle, and as most Australians do, we moved around quite a bit. Over the years we’ve lived in six houses ~ built one from scratch and improved the others with either big or small renovations, all done by hired builders. But now that Hubby has retired, he’s a man possessed ~ renovating has become his passion! From early morning to mid afternoon he’s out there hammering away at something, creating his version of a great place to live. And it’s a good thing too, as this house is badly in need of repair. I’ve never lived in such a run down place. It was a sad old house indeed when we moved in ~ very unloved, and it took me a bit of time to get used to the fact that it was falling apart inside, but as Hubby said, it had good bones and he fell in love with it at first glance so here we are, and here he is doing what he set out to do when he first saw the place ~ fix it up!

We had a general idea of the renovations we wanted to do, but apart from what tradespeople like electricians and plumbers did, there was a long list of bits that needed doing first, like repairing verandah boards, lining cupboards, replacing doors, fixing steps, making rails and pump covers, repairing fences, planting trees, and the biggie ~ painting the outside of the house. Only then could we think about what we’d do with the mess outside the kitchen door. The back porch was small and downright dangerous, and the ground area was wet, sloppy and awful (that’s girl talk for it being a ‘rainwater sump with rotting deck timber’) so hubby decided to build a decent covered deck. My thoughts were, given that he was doing it all by himself and there was lots of heavy lifting and tall ladders involved, it was probably a bit beyond him, but he was resolute … he was building the deck. My idea of a decent covered outside area was a large roof, a bit of a porch, and some pavers and gravel for sitting around the barbeque, but no, no, no! He had a plan and he would not be swayed, and in case I didn’t hear him the first time, he was BUILDING THE DECK! 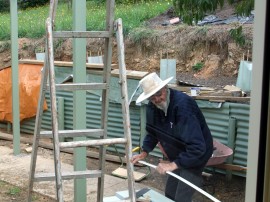 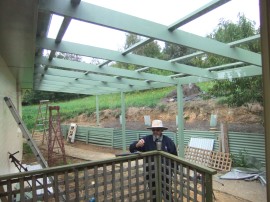 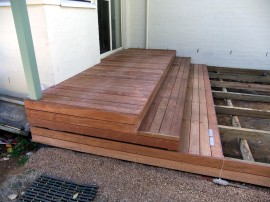 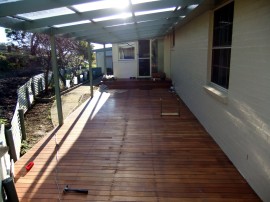 And so it began. With measurements in hand Hubby took himself off to the local hardware store and connected with his new best friends … yes, there were days when he needed to pop up there three times in the space of 6 hours! And of course the locals (hubby does all the shopping so he knows everyone) have all been kept up to date as well. The owners of the post office, who nearly bought the place when it was for sale, expect a blow-by-blow of everything we do plus photographs! And anyone who’s ever made a delivery of materials has also taken a moment to check in on the building progress. All I can say is, you’ve got to love the people in small country towns!

So bit by bit and board by board, our deck grew into something rather fabulous. But of course building it without fixing the surrounding garden simply wouldn’t do. So there was also a lot of moving of dirt, retaining of garden walls, filling and planting, and covering the very grotty broken pathways with pavers and gravel. And in doing all of it Hubby only fell off the ladder from a great height once! It was a big ‘ouch’ and under instructions from wife and four daughters he took a week off! Fast forward five months and everything is now finished … it’s been a huge job, and it looks fantastic ~ even the cats love it! Compared to what was there before Hubby has created something very special. He has a flair for designing just the right thing for the right space. And Sheep Man, who owns the little flock on our land, is coming over in the next few days with his strong-man brother-in-law to carry out the barbecue. 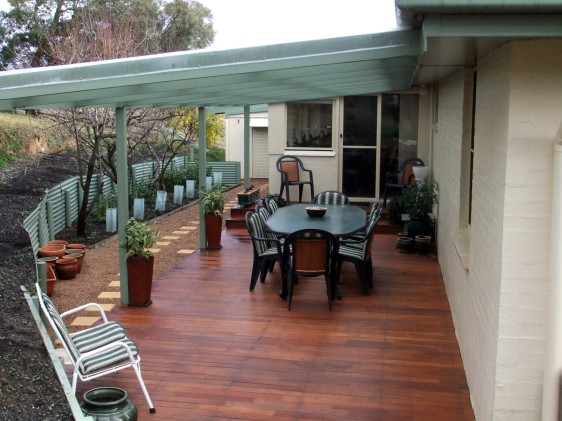 So that’s the deck done! And now we sit out there with swelled chests admiring it and loving that we can soak up the beauty of our surroundings in such a luxurious space. It’s a pleasure and a joy, and my man is a miracle worker. He is so special and I am truly blessed.