When I dream about a house it’s almost always the same one ~ the house I grew up in. A modest two bedroom fibro rental with a big backyard, it was plain and basic, and looked like all the houses in the street. So connected am I to the memories of it, I can barely remember living elsewhere. After moving around like gypsies during our first few years in Australia, it became our safe haven ~ the house which we made into a home, and where we lived until I was 18 years of age.  It’s where I started and finished school, where I found my first job and where I experienced all the significant events of childhood and young adulthood.

While the house may have been plain, it was very well dressed, especially on the inside. You see, my mother loved to decorate. It wasn’t unusual to come home to find our beds in another room, or the lounge suite recovered! She painted and wallpapered, and moved furniture from room to room regularly. When she got it into her mind that it had to be done, it was done! One day I came home from school to find her painting. Nothing unusual about that, except that on that particular day she was painting the kitchen ceiling. Barely five feet tall, she had created her own special painting platform ~ she’d placed a chair on the laminate table and on top of that there was a stool. And perched on top of that, was my little mother painting the ceiling watermelon pink! As a consequence the kitchen had the honour of being the most impressive room in the house for a couple of years.

My brother on his scooter in our street

Even though our house was small, it was always bursting at the seams. The little room off the kitchen, which many years later I realised, was a dining room as it also had a door into the lounge which we blocked off with the piano, was our guest room. And it was always occupied, by either a full-time boarder or a friend in need. Mum, being who she was, opened her heart and door to them all, and they became part of our family.

The borders were generally lonely gents who drank just a little too much, and the friends in need nearly always outstayed their welcome. When my aunt and uncle moved in for a year with my two cousins the house was reorganised yet again. They occupied the guest room and the lounge room. Mum never turned anyone away.

A party at our house ~ Mum with Dad reclining in front are on the left, and I am on the far right.

Yes, it was a house full of people, but it was also a house full of parties. Having survived the war, my parents and their friends took every opportunity to enjoy life. A weekend rarely went by without the clinking of glasses, music, dancing, laughter and convivial conversation. Compared to our quiet Australian neighbours we made lots of noise, but that’s who we were ~ it was the sound of joy and gratitude.

My mother would be in the kitchen cooking up a storm, and my father would be enjoying time with his war mates, mostly single men who had been separated from their families during the war. They gravitated to us to be part of our family, to hear the sound of children and get a home cooked meal. On those party weekends, when we woke on a Sunday morning, we always seemed to have accumulated more people, and Mum, being the kind soul that she was, fed them yet again. 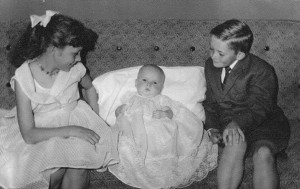 My brother and I with our baby sister taken on her Christening Day. As always, Mum sewed our outfits and worked well into the night to get them finished.

Every event in our family was celebrated in a big way. The most impressive of all was my sister’s christening. Eighty people filled our little home. Furniture was crammed into the two small bedrooms and trestle tables with pristine white tablecloths were set up in the lounge and down the hallway. Mum cooked for days and did a wonderful job, but the pièce de résistance was the suckling pig which Dad roasted in the ovens at the local bakery where he worked. It was quite a party!

While we created many a good memory during our years there, the day came when it was time to leave. My parents were about to become home owners for the first time ~ a newly built house awaited us, and we were so excited. I said no sad goodbyes ~ not even to my friends. Our bright future was the only thing which filled our hearts and minds that day. There was however one heartbreaking moment which still tugs at my heart, and that was having to leave behind a little beagle. As with all the people who found their way to our door, he was welcomed with open arms. He had loving owners, but during the day they weren’t at home, and in search of company, one day he found us and fell in love with my baby sister. From that day on and for the next two years he spent every day with us, going home only in the evening. As animals do, on the day we left he sensed something was amiss. He watched us load up, and as we drove away he ran after our car. He finally gave up, and with tears in my eyes, I watched as he slowly disappeared into the distance.

So it was with sadness and joy that we moved on. The little beagle who loved us and the house which was our safe haven for so many years became part of our past, firmly locked in my heart, and in my dreams.